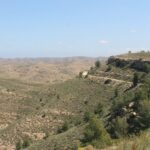 Libya’s Al-Shaafin Reserve, located in northwestern town of Msallata, was recently included by UNESCO in its World Network of Biosphere Reserves, marking the first time that Libya enters the U.N. list.

In a statement, UNESCO stated that Al-Shaafin is the first biosphere reserve in Libya, and its biogeographic mountainous region in the Mediterranean basin includes a variety of supporting habitats of dry forests and grassy steppes in the north and the very arid southern regions of the Sahara Desert.

It also indicated that this reserve is home to a variety of rare and endangered species, such as medicinal and aromatic plants, and animal species included in the Red List of Threatened Species issued by the International Union for Conservation of Nature.

UNESCO selects annually a number of sites classified as new biosphere reserves with the aim of promoting sustainable development, protecting terrestrial, marine, and coastal ecosystems, and encouraging biodiversity conservation efforts. This is the first time that Libya joins the list of countries that embrace this type of reserve.