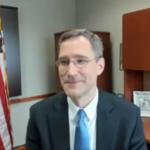 The role of Marshal Khalifa Haftar and all other political and military actors in the Libyan scene is “a decision for the Libyan people and Libyans only,” said the Acting Assistant U.S. Secretary of State for the Near East, Joey Hood.

“If he decides to play a constructive and practical role, it is up to the Libyan people to decide exactly what role he should play,” Hood said Tuesday at the end of a two-day working visit to Algeria, in response to a question about the expected role that Khalifa Haftar will play in the Libyan political scene.

Regarding U.S. moves to withdraw foreign troops and mercenaries from Libya, the diplomat confirmed in an interview with the official Algerian Press Service that contacts have been made with Turkey, in addition to talks with Russia, Europeans and all other parties, especially Libyans.

Hood believes that the top priority is to remove all foreign forces, put an end to all foreign military interventions, as well as agents inside Libya so that the Libyan people can regain full sovereignty.

He added: “The government elected in December, can decide what relations it wants to establish with other countries on its own without the pressure represented by military forces in its territory.”

It is noteworthy that the US special envoy to Libya, Richard Norland, had asked a prominent Libyan figure not to run in the upcoming presidential elections in Libya, which are scheduled to be held on December 24, an informed source told The Libya Update.

“Norland contacted an active leading figure in Libya with the aim of persuading them not to run for the presidency of Libya,” the source, who asked not to be named, said.

“How can the United States, one of the most important democracies in the world, press for Libyans not to exercise their right to run?” The source asked.

“There is a contradiction in America’s policy in Libya. On the one hand, it supports the December presidential and parliamentary elections, and on the other, it pressures to deprive a number of Libyans of their right to take part in them,” the source added.