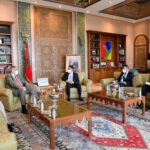 Moroccan Foreign Minister, Nasser Bourita, affirmed that the solution in Libya passes through the elections, which should be held on the scheduled date next December, noting that his country is working to open a space for dialogue between the Libyan parties.

“Crisis in Libya is related to legitimacy, and the solution can only be achieved through democratic practice by respect for the Libyan institutions and the High National Elections Commission (HNEC),” Bourita said during a joint press conference with the UN Special Envoy to Libya, Jan Kubis, in Rabat.

The Minister called for reliance on the progress achieved for the success of the next elections.

He praised the important role of the United Nations and its Special Envoy in reaching an agreement on the political and military aspects, pointing out that Morocco does not have any agenda, solution or initiative towards Libya, but rather is working to open space for the Libyans for dialogue and support for the United Nations to resolve this crisis, rejecting foreign interference in country.

For his part, the UN Envoy said that the elections will be part of the solution to a number of problems in the country, stressing the need to hold them on their scheduled date on December 24, and praising Morocco’s cooperation to support the political tracks in Libya.