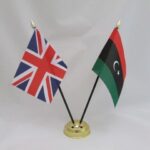 Date: Sunday, December 26, 2021
93 Views
British Embassy has said UK is clear that the transfer of power from the current Libyan interim executive authority to the new executive authority shall take place following the announcement of the results of early and prompt parliamentary and presidential elections.
“The UK is firm in its commitment to the ongoing political process in Libya and the holding of prompt parliamentary and presidential elections,” the Embassy said in a statement on Sunday.
The statement said UK shares the disappointment of the Libyan people that it was not possible to hold these elections on 24 December, and call on the relevant authorities to work on delivering these elections with minimal further delay, in order that the Libyan people can make their choice in fair and inclusive elections.
“To avoid conflicts of interests and to promote a level playing field, candidates holding roles in public institutions should continue vacating them until the announcement of the electoral results,” it added.
“We support the Libyan House of Representatives in its calls for the cooperation of all parties in creating the right conditions for elections as soon as possible,” it pointed out.
“The UK does not support any individual, but continues to commend the work of High National Elections Commission (HNEC) and other relevant institutions to deliver elections that reinforce the independence, sovereignty and unity of Libya,” according to the Embassy’s statement.
Tags:HNECHoRLibya electionsUK